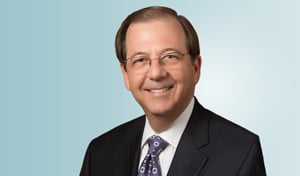 Alan Witt served as CEO from 1979-2021. Under his leadership, PBMares has strategically expanded to a leading Mid-Atlantic-based firm with a national presence as a top-100 accounting and business consulting firm.

Alan views every client as unique and loves discovering the different aspects that make them successful. He also enjoys his profession’s ability to offer the equivalent of an on-the-job MBA and maintains there is no better way to understand business than to take a job in public accounting.

A licensed CPA in Virginia and North Carolina, Alan has a passion for his chosen career and has served in multiple roles over the years, helping others expand their expertise. He has held several mentoring and leadership positions with groups like the RSM US Alliance of accounting firms, where he serves on the Executive Advisory Board, and the VSCPA, where he has served on the Accounting and Auditing Task Force and committees focused on ethics and chapter activities. He also served on the AICPA’s credit union committee and chaired the group that developed the AICPA Audits of Credit Unions Guide. Additionally, Alan was selected to sit on the national executive advisory board that formed the AICPA G-400 which advocates for the needs of the top 100-500 firms.

Alan’s local community efforts outside of work include serving on the boards of the Hampton Roads Business Roundtable, Reinvent Hampton Roads, Riverside Health System, TowneBank, the Peninsula Community Foundation, as well as the Virginia Chamber of Commerce where serves as First Vice-Chair. He also works with other organizations that focus on transportation, industrial development, education, politics, finance, and audit and previously served as a Newport News City Council member.

Alan has a host of awards for his community service endeavors as well, including the Peninsula Humanitarian Award from the Virginia Center for Inclusive Communities, the 2016 Community Builders Award, Bremond Lodge No. 241, the Distinguished Community Service Award from the Rotary Club of Oyster Point, the Daily Press Citizen of the Year Award, VSCPA’s Public Servant of the Year, CNU Outstanding Alumnus Accounting Chair #1 and CNU College of Business and Economics’ Outstanding Alumni Award. In addition, he was proud to serve as Honorary Chairman of the Achievable Dream 24th Tennis Ball.

In December 2020, Witt was honored during the Virtual Tennis Ball Gala by the partners of the Firm, committing PBMares as the sponsor of An Achievable Dream Class of 2021. As class sponsors, PBMares has committed to providing annual merit scholarships for each member of the class for each year they attend college and maintain a certain grade point average. The graduates of the Class of 2021, who were honored in a special ceremony during the Virtual Tennis Ball, will be known as the Alan S. Witt Scholars.

Always looking for ways to better his community and those around him, Alan leveraged the recognition he received to gain visibility for regional issues through his work on governmental boards and commissions, economic development coalitions and non-profit boards. He has been a force that bridged the ‘water’ division, resulting in the betterment of Hampton Roads and the Peninsula as a whole.

"There is no better way to understand business than a job in accounting. Working with so many varied clients allows you to see so many aspects of what makes them successful. In the process, we have the privilege of being that most trusted advisor."
pb_admin2021-03-15T13:51:54-04:00
Go to Top