Businesses with $5 Million or More of Gross Receipts Sourced to Washington, D.C. Hit with Ballpark Fee

Many are certainly lamenting that we may not be able to see any baseball this year at Nationals Park.  However, the District of Columbia will still be collecting the Ballpark Fee which is coming due June 15, 2020.

What is the Ballpark Fee?

When the District of Columbia brought baseball back to the nation’s capital in 2008, they established funding to help build what is now known as Nationals Park by establishing a Ballpark Fee.  The fee is considered a tax and must be paid on time or penalties and interest will be assessed

When the fee was initially established, only businesses with a physical connection to the district were impacted.  But now, businesses have to pay the fee if revenues from services are delivered to customers located in the district, regardless of where the service was actually performed.

Businesses with $5 million or more of gross receipts sourced to the district during their preceding tax year and ending prior to June 15, are required to file Form FR1500 electronically with the district by June 15 each year.

Taxpayers also need to be mindful of the appropriate definition of gross receipts for their business.   For example, a retailer who sells merchandise must report gross receipts from their customer without any reduction for the cost of the product purchased from their supplier.  On the other hand, a broker who merely facilitates contracts between one party and another and is paid through commission or fee for service would only include the commissions or fees received as their gross receipts.  They would not include the total value of the transaction itself even if they act as a conduit to move cash from one party to the other as they never assume title to the asset sold.

Fees are assessed based on the following schedule: 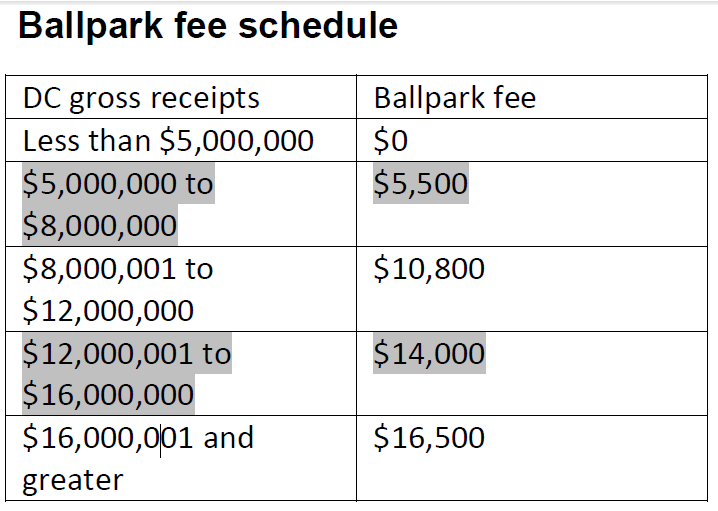 Changes to the Ballpark Fee

Starting with tax year 2015, the district began requiring businesses to apportion income to the district if revenues from services were delivered to customers located there, regardless of where the service was actually performed.   This resulted in many companies located outside of the district being subject to the ballpark fee that had not been previously subject to it.

Needless to say, this fee has caught taxpayers by surprise. The fee is not incorporated into the district’s franchise tax returns and is not a common tax that might be proactively researched as property taxes or business privilege taxes might be.  The company may not even realize it has tripped the filing requirement if their district gross receipts apportionment had been less than $5 million in prior years and was not required to file the return and pay the fee.

Don’t get caught without your glove!  Check to see if you are required to file according to these new rules and enjoy the game.