Millions of S-corporation shareholders have a new responsibility this tax season: reporting their own tax basis using the newly finalized Form 7203. Information about the shareholder’s tax basis is likely already available, albeit in different forms and formats. The challenge will be accurately implementing the new form in a short amount of time and maintaining proper basis records going forward.

And as is the case in the first year of any major tax change, there is bound to be confusion. Though in development since summer 2021, Form 7203 was only recently finalized at the end of January 2022. Many tax professionals are learning the new form at the same time as taxpayers.

S-corporation shareholders can deduct their portion of the entity’s total losses in a year on their individual tax returns. Typically, this amount is limited to their basis, or cost, in stocks and loans from the shareholder to the entity. The basis is calculated at the end of the year. Because of basis limitations, it’s possible that a shareholder might be disallowed from deducting certain losses in one year and must carry them forward until their stock or loan basis is increased or restored.

Shareholders have been responsible for tracking their own stock basis for the past few years. In 2018, the IRS implemented new tax basis reporting requirements, which mandated that shareholders attach a tax basis schedule to their Form 1040 under certain conditions. The conditions that were new in 2018 have been retained for this new 2021 tax year change, so the filing requirements are at least the same, just with a new more formal tax form.

At that time, many shareholders weren’t accustomed to maintaining their own tax basis and relied on the entity to provide annual information about distribution or losses when they provided the year-end K-1 statements to the shareholders. When filing taxes, shareholders would often claim the related deductions or distributions directly from the K-1 statements, but usually weren’t required to provide proof of the corresponding basis calculations unless the IRS opened an inquiry.

There was also no formalized process or form for reporting the basis and any K-1 loss or distribution limitations. The amounts were simply claimed by the shareholder and often times were reported incorrectly on their tax return.

And when shareholders were required to report their stock basis, the information was located on a supplemental, three-page worksheet as part of the Schedule K-1, which meant the entity sometimes provided the calculation each year but the reporting was often subject to inconsistencies across entities or even overlooked by the shareholder. The basis calculation can often be complicated for most shareholders, especially if the taxpayer hasn’t maintained thorough records starting with their original investment date or when they first inherited their stock.

Starting with the 2021 tax year, a new Form 7203 replaces the supplemental Worksheet for Figuring a Shareholder’s Stock and Debt Basis.

S-corporation shareholders will need to file Form 7203 with their individual tax return this year if they meet one of the following requirements.

Fortunately, these reporting requirements haven’t changed since the 2018 tax year. The beginning basis amount should already exist in a different format, so shareholders will need to locate it on the Schedule K-1 basis worksheet or on an additional schedule and cross-reference their own records to ensure accuracy of the beginning amount to use on the new form.

It’s entirely possible that shareholders would be required to file Form 7203 in certain years and not in others; however, it’s still best practice to complete and retain the new form each year regardless. This would ensure their stock basis is consistently maintained from one year to another, especially as the entity may not keep accurate or thorough records on every shareholder.

Affected shareholders must first check the box in Part II (Income or Loss From Partnerships and S Corporations), Schedule E of their Form 1040 to indicate if a basis computation is required. 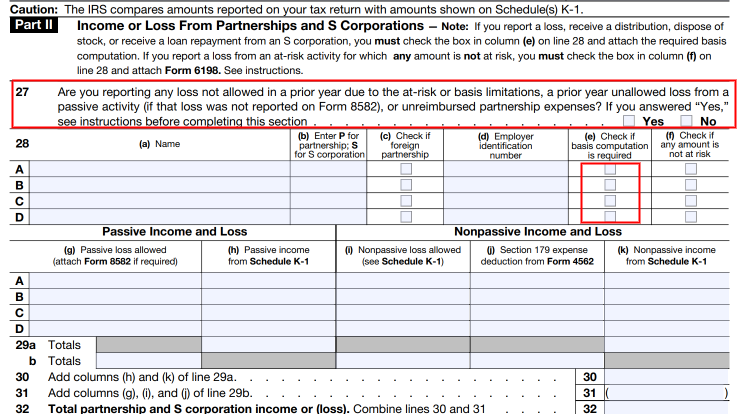 Then, they must complete and file the new Form 7203, which contains the basis calculation. Going forward, shareholders are required to report their tax basis here rather than on a three-part worksheet on the Schedule K-1.

Part 1 – Shareholder Stock Basis, which will report any additional stock contributions each year along with changes to basis from income and deductions reported on the K-1. Distributions will also be reported on this form after the other basis components are included. Any gain on distributions in excess of basis will now be calculated on the form and will flow directly to the Schedule D on the shareholder’s tax return. 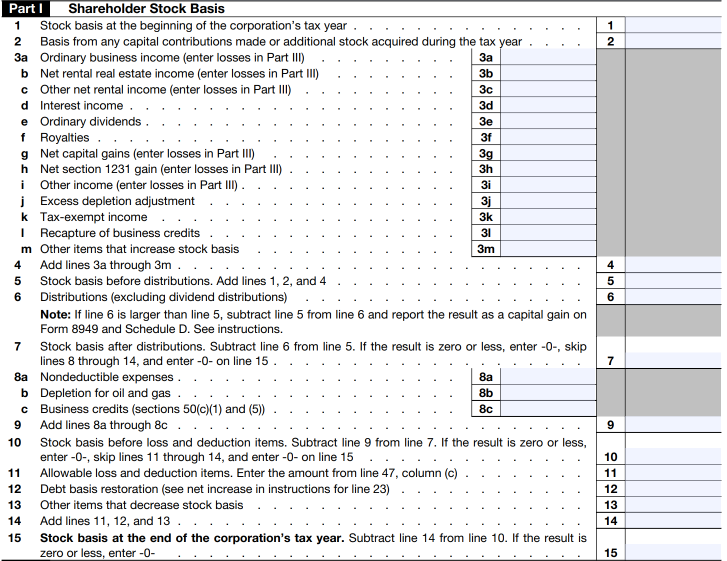 Part II – Shareholder Debt Basis, which will report changes in direct shareholder loans to the S-corporation, such as loan advances and repayments. The debt basis is also now tracked separately by each shareholder loan, and shareholders must indicate if the debt is evidenced by a formal note or is an open account debt.  Any gain on loan repayment will now be calculated directly on the form and will flow to other schedules on the shareholder’s tax return. 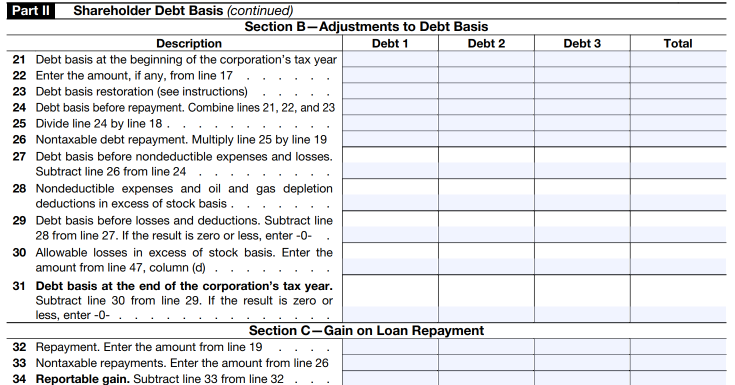 Part III -Shareholder Allowable Loss and Deduction Items, which will report any loss limitations that are being triggered due to a basis limitation for the tax year.  Any applicable loss carryover amounts will now be calculated and tracked going forward on the form. 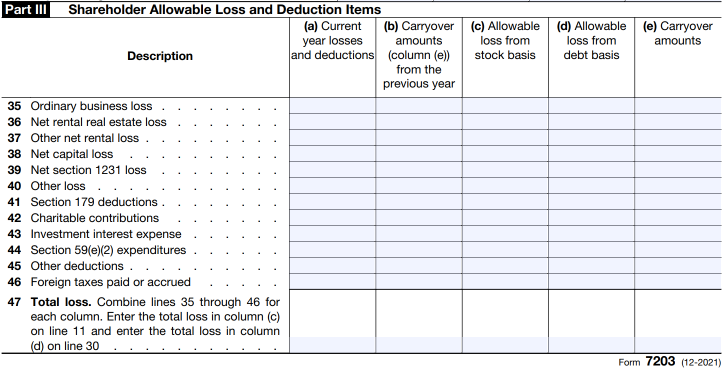 If a shareholder is filing Form 7203 because of a stock disposition to determine his or her cost basis for capital gain reporting, he or she must attach two separate forms: one to figure the stock basis at the time of the sale date and the second to figure any remaining stock basis existing at year-end. The stock basis amount is then used to calculate their capital gain on Schedule D.

Regarding stock blocks, when a shareholder holds a different basis in different blocks of stock due to inheriting or purchasing stock at different times, he or she generally allocates pass-through items pro rata to all shares, regardless of the different bases. In the case of a partial stock sale or partial stock redemption, shareholders should file more than one Form 7203 and indicate which period it covers. This option is helpful for shareholders who plan to sell part of their stock throughout the year or choose to use their stock block with the highest cost basis first to lower their overall realized capital gain.

Shareholders don’t have to file Form 7203 for entity loans they signed or co-signed themselves, except if a loan payment was made directly by the shareholder on an entity loan.

The IRS cautions that “when determining your basis in loans to the corporation, remember that distributions don’t reduce loan basis and loans that a shareholder guarantees or co-signs aren’t part of a shareholder’s loan basis. Shareholders only obtain basis from acting as a guarantee or in a similar capacity to the extent the shareholder makes a payment pursuant to the guarantee.”

So typically, shareholder loan basis is only obtained by the shareholder making direct loans to the entity.

Though shareholders were already responsible for tracking their own basis, up until now the IRS hasn’t requested the calculations up front. If required, shareholders must file Form 7203 with their individual tax return. This change can cause confusion, and taxpayers may want to allow a little extra time to file their 2021 taxes.

Shareholder basis reporting continues to be a significant audit focus for the IRS and shareholders need to be vigilant about maintaining good basis records. Tracking basis becomes very important in the event a business entity has a significant operating loss in a particular year or the shareholder decides to take additional funds out of the business for another investment opportunity.

Shareholders can use Form 7203 every year, whether they’re required to file it or not, to ensure their tax basis is consistently maintained. For questions about Form 7203 or S-corporation shareholder tax returns, please contact Charles Dean Smith, Jr., CPA and Partner in PBMares’ Tax practice.