One of the little-known provisions of the House of Representatives’ HEROES Act could have big impacts for high-income taxpayers and small businesses later on as tax policies continue to be reevaluated. Contained within the extensive text of the HEROES Act was a proposal to repeal the $10,000 cap on state and local tax deductions, known as the “SALT cap.”

The SALT cap, which went into effect after the Tax Cuts and Jobs Act (TCJA)  of 2017, has been problematic for many high-income taxpayers who still itemize their returns or lost the benefit to do so beginning in FY 2018, the first taxable year that the cap was in place. Under current law, the cap remains in effect through FY 2025. Several attempts to modify the SALT cap have been made in both the House and Senate in 2019, but so far Congress has been unable to reach an agreement.

What Is the SALT Cap, and Who Is Affected?

Prior to TCJA, taxpayers could deduct the full amount of their state and local real estate taxes, personal property taxes, and income taxes when filing their annual federal return. The option to deduct sales tax instead of income taxes was (and still is) also available. The SALT deduction is available to all taxpayers, but taxpayers living in high-tax areas and/or high-income taxpayers usually benefit the most. To claim the SALT deduction, taxpayers need to itemize deductions on their federal return.

When the SALT cap went into effect, Washington, D.C. was among the highest in combined effective state and local tax rates in the country. Parts of northern Virginia and Maryland also have higher than average tax liabilities for residents due to many residents’ high incomes and the region’s high cost of living. This results in a greater number of taxpayers with SALT deductions greater than $10,000.

Since TJCA, fewer taxpayers are itemizing, because it no longer makes sense to do so. A doubled standard deduction makes it harder for most taxpayers to have enough deductible expenses to exceed the standard deduction. High earners with significant charitable and/or mortgage interest still itemize, although with fewer benefits.

As a result, the SALT cap has increased tax burden for high-income taxpayers who live in tax-heavy areas as taxpayers are not able to offset some of the SALT burdens with federal itemized deductions 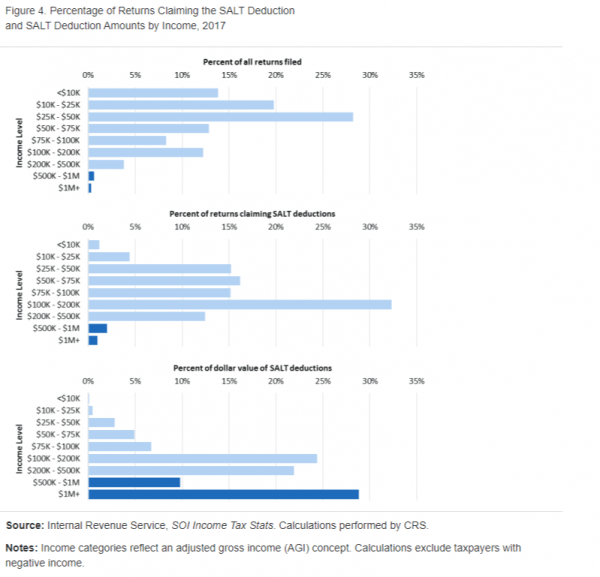 States’ Response to the SALT Cap

Before TCJA, states and local municipalities had more flexibility to impose higher taxes, since residents could absorb some of the costs through the SALT deductions. Since the cap went into effect, some states issued their own nonconforming legislation to increase the value of residents’ deductions. In the early months, some states instituted workarounds related to charitable funds that the state created, whereby donors received a state tax credit in exchange for donations. The IRS has since disallowed this practice as the transaction is seen as a quid-pro-quo benefit received as a result of a charitable contribution.  Such contributions are not deductible regardless of the benefit received.

More recently, Maryland passed a SALT workaround law for pass-thru entities, allowing them pay state income tax at the entity level rather than having the tax obligation pass through to the owners’ individual tax returns. The IRS doesn’t impose a SALT cap on business entities, so qualifying businesses electing this workaround would not be subject to the ordinary $10,000 limitation. Maryland now joins six other states with similar laws.

Connecticut, Wisconsin, Oklahoma, Louisiana, and Rhode Island enacted SALT tax workarounds for pass-thru entities already. Connecticut’s SALT tax workaround imposes an income tax on partnerships and S-corps doing business in the state beginning for tax years on or after January 1, 2018. With this model, residents and non-residents alike are granted a tax credit against income taxes paid at the entity level.

The SALT cap has continued to receive attention in Congress; in 2019 alone, there were more than 12 proposals to either repeal or modify the SALT cap. The most recent development occurred in January 2020. A House-passed bill proposes doubling the SALT cap value for 2019 and eliminating it in 2020 and 2021. The bill was referred to the Senate but likely stalled when Congress had to shift to coronavirus legislation.

The House of Representatives passed a comprehensive bill known as the HEROES Act on May 15, 2020, to provide stimulus and funding to combat the impact of COVID-19. Senate Republicans recently offered their version of coronavirus relief in a bill known as the HEALS Act the week of July 28, 2020. Now that the Senate is involved in some version of the legislation, a law with SALT cap revisions is more possible.

The bigger picture for high-income taxpayers and small businesses is to continue to proactively engage in tax planning and tax projections. Understand SALT’s impact on your individual and business tax liability, and work with your PBMares advisor on a strategy that manages all aspects of your tax exposure.